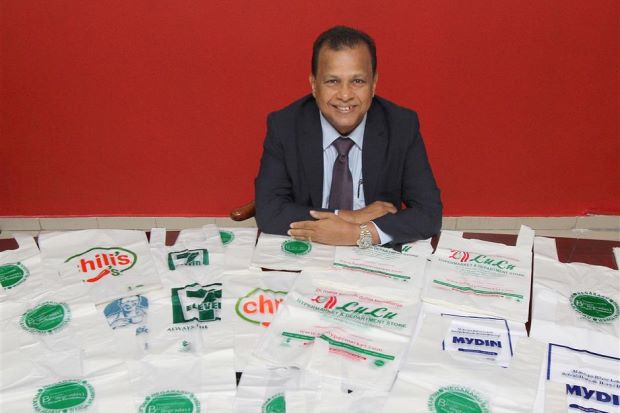 PLASTIC bag manufacturing used to be the in thing, recalls Datuk T. R. Vijayasagren. In the late 1980s into the 90s, growth was tremendous and profits were roaring. But not anymore. Plastic bags have fallen out of vogue as consumers become more concerned about their impact on the environment. This would inevitably affect plastic bag manufacturers, particularly smaller players like Velson Packagings Sdn Bhd.

In fact, the plastic bag ban in some states over the past few years has resulted in losses for Velson. Consequently, the founder and director of Velson took it in his stride to change his products and his mindset on the environment.

“I’ve been in the industry for 30 years, I also think we should change,” he says. 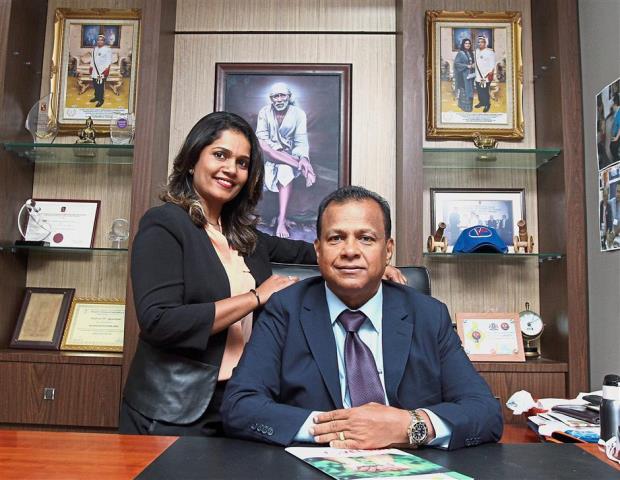 Good team: Vijayasagren is looking to hand over a bigger role of running the company to his wife, Shujahtha.

Vijayasagren learned to make plastic bags after completing a course in Singapore in the mid-1980s. He had been working a few years with a forwarding company and found that he was going nowhere. “I was young. I wanted to take chances in my life. Either I make it or break it,” he reminisces. Determined to make something of himself, he sold his car to pay for his course in Singapore, paving the way for his entry into the lucrative industry of plastic bag making. Upon graduating, he borrowed RM5,000 from his friends to purchase a secondhand machine to make plastic bags. He founded Velson in 1989 and started producing samples for suppliers.

“Of course, nobody trusts you when you are small. You have to show them and get them to be confident in you,” he says.His early orders came from a Chinese bakery. “Those days, 30 years ago, there were a lot of nice people and they were willing to help you out,” smiles Vijayasagren, who hails from Klang.

From transparent plastic bags for breads, he then moved on to produce curry powder bags and shopping bags. Although he struggled to be noticed in the beginning, things got easier once he was able to obtain bank loans to fund his operations and expansion. The company managed to score big retail clients such as Mydin, Kamdar and Globe Silk Store.

In its heydays, Velson was enjoying annual growth of 30%. Till today, Vijayasagren maintains a close relationship with his customers. He makes it a point to meet with them, regardless of whether they are big or small clients. According to Vijayasagren, Malaysia is one of the largest plastic bag exporters in the world. This is largely due to the fact that we are a oil-producing country, which produces feedstocks for plastics resins.

He notes that the country is home to large players churning out sales in the hundreds of million ringgit. A report by the Malaysian Plastics Manufacturers Association notes that Malaysia’s total export of plastic bags for 2015 increased by 6.5% to RM4.25bil, compared to RM3.99bil in 2014. Malaysia is also the largest stretch film producer in Asia, and third largest in the world. Total export of plastic films and sheets increased by 5.5% from RM4.58bil in 2014 to RM4.83bil in 2015.

These days, though, competition is aplenty and margins, a slim picking. Velson’s business took a downturn about three years ago when more states in Malaysia joined the crusade against plastic bags. 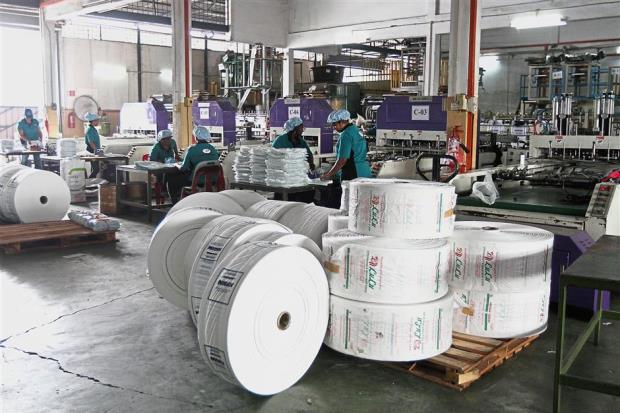 Room to switch: Velson currently produces 100 tonnes of bags a month, about 20% of which are compostable bags.

With its market shrinking, Velson started looking into the viability of producing compostable bags. These bags, explains Vijayasagren, are made from corn and starch and can decompose into the soil as fertiliser within eight weeks to a few months. The company spent about RM2mil in R&D over the last two years and worked closely with its Australia-based raw materials supplier to create the compostable bags.

Velson is one of 14 companies in Malaysia recognised by Sirim for producing such bags. One of the challenges in producing these bags, though, is the higher cost of raw materials as they need to be imported. Notably, the currency exchange at the moment is not in favour of importers. Additionally, these are organic materials, which make them naturally more expensive.

But one of Velson’s biggest obstacles to ensuring its compostable bags take off is market awareness and the reluctance of retailers to spend more on environmentally-friendly products. “Retailers are getting plastic bags for cheap. But now, you are selling them something that costs more. Cost is still a problem for businesses in Malaysia.

“At the moment, they are making profits from (selling consumers a plastic bag at 20 sen apiece). We charge about, maybe 8 sen per plastic bag, and 20 sen for compostable bags. To the consumers, the 20 sen they pay for a plastic bag can still cover the cost of a compostable bag. Just that retailers can’t profit from it. So just don’t take profit lah, for the purpose of the environment,” says Vijayasagren.

He observes that many smaller, local companies are more receptive of its compostable bags compared to large-scale retailers. But he is determined in his mission to change the production and use of plastic bags in the industry. What it takes, is a lot of education so that retailers and consumers understand the impact of using plastic bags on the environment.

He explains that over the years, the types of plastic bags produced have changed – not necessarily for the better. Twenty years ago, a traditional plastic bag that is used and thrown away would remain in the landfill for over 40 years. Then, biodegradable bags came along. Biodegradable bags, he shares, would break into smaller chunks, which means smaller bits of plastic can spread over a wider area.

Now, the industry is producing oxo-biodegradable bags, which breaks into even smaller fragments. These fragments will be windswept to other areas. “They can go up into the air. So our children will be breathing in toxic air. Plus, they go into the waters, he says. “If I can change 50 tonnes of my production (to compostable bags) a month, I’ll be changing 600 tonnes of plastic bags a year. That’s my part to play in this.

“You can’t stop people from using plastic bags because it is the cheapest form of packaging. People have been using it for the last 50 years. Even though you bring your own bags to the supermarket, there are things that you still need to put into plastic bags first like your fish, meats and vegetables.

“Because people still need to use those plastic bags, what we are trying to do is change the kind of bags they are using to the compostable ones,” he says.

Currently, Velson produces about 100 tonnes of bags per month. About 20% of that are compostable bags. The rest of his capacity are still plastic bags. Vijayasagren hopes to phase out his production of plastic bags completely in five years’ times. “Although they are more expensive, we also need to contemplate the future of our next generation. I believe the plastic industry can make a lot of difference if they make compostable bags because we are producing a lot of plastic bags in our country,” he adds. Naturally, if demand picks up for its compostable bags, Vijayasagren expects profitability to return. Velson currently makes an average revenue of RM12mil a year.

Sizable team: The company has about 40 employees.

When Velson started producing more environmentally-friendly bags, Vijayasagren’s wife, Datin Dr. Shujahtha Rajoo, started paying closer attention to the business. “They genuinely wanted to go green,” she offers. She also notes that the corn and starch used in the production of the compostable bags were waste food items.

Shujahtha is optimistic that more and more people will embrace a greener lifestyle, particularly among the younger generation. However, despite global trend supporting this change in lifestyle, the pace of change is rather slow. According to a report by Reuters, between 500 billion and 1 trillion plastic bags are used globally each year, with fewer than 10% recycled. Many end up in the world’s oceans or dumped in landfill.

More than 8 million tonnes of plastics enter the ocean each year, and marine experts fear there could be more plastic than fish in the ocean by 2050, measured by weight. Plastic degrades over time into tiny particles which are ingested by marine life, harming the food chain and environment. Many supermarkets around the world have started charging customers for plastic bags, and are promoting reusable bags and free recycling services to cut down on waste and reduce single-use plastics.

More than 40 countries have banned, partly banned or taxed single-use plastic bags, including parts of Malaysia and India, China, France, Rwanda, Italy and Kenya. Shujahtha acknowledges that the government ban on plastic bags in some states over the past few years have helped with demand for its compostable bags.

“If we were to go into the market with this product without all this awareness and enforcement, it would have been five times harder to create awareness. We think this law should be enforced nationwide. “If policy changes, we are more than happy to change 100% of our production. But enforcement has to be stronger. And I think if government provides incentives for going green, then manufacturers will go all out in changing their products,” she says.

If the trend for compostable bags picks up, there may be possibilities of raw material suppliers setting up their base here, which could mean lower cost of materials. As his wife takes on a more hands-on approach to the business, Vijayasagren is slowly giving her room to take the lead as he prepares to take life a little easier.

For now, though, he is certainly satisfied with his new product and he says enquiries have been coming in from countries like the US, the Middle East, Hong Kong, Australia and India. While negotiations are still preliminary, this could be a platform for the company to look at the export market in a bigger way as overseas sales currently make up only a fragment of their revenue.

“I want to grow big with this,” he says. There is still room for Velson, which has a staff strength of 40 people, to double up its production to 200 tonnes a month. Both Vijayasagren and Shujahtha’s concerns about the environment is understandable, given they have an only child. “My son is seven years old. One day, he told me, ‘Papa stop making plastic bags. You are polluting the world.’ I said, ‘Ok son, I’ll do something about it’,” Vijayasagren shares.

“We just want people to know the importance of handing over a better world,” she adds.